Hyperlink: RBG and the Supreme Court with Jireh Deng

If you have ever turned to Wikipedia for one specific thing and realized, 30 underlined blue links later, that you are miles away from your original inquiry then you might understand the premise of 22 West Video’s podcast Hyperlink.

Host Dominic Hure was joined by Jireh Deng, an applied math in economics and international studies major who is also a Supreme Court enthusiast. Specifically, Deng is a great admirer of Justice Ruth Bader Ginsberg, or simply RBG as she is affectionately referred, and brings to the table hyperlinks on hyperlinks, from Ginsberg’s origins and the struggles she faced as a woman pursuing law to the intricacies of the Supreme Court and specific court cases.

Donning an RBG patch on her navy blue shirt, Deng opens up by introducing the justice as “the baddest lady on the court.” Ginsberg studied law at Havard in 1956 during a time when women involved in any type of higher education was greatly discouraged. Adding a husband diagnosed with prostate cancer and baby daughter in the mix, the boundaries of what she could and could not do protruded further and further out.

“She has to move to Columbia to finish her third year of law school,” Deng said. “And she graduates top of her class [...] with a baby and sick husband. She can do it all.” 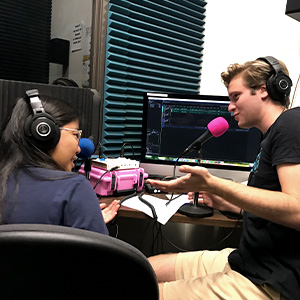 Deng then went on to go over the issues and cases that Ginsberg had been a leading force behind, such as abortion, international law, search and seizure, and women’s rights. Deng specifically brings up the Frontiero v. Richardson case, which was ruled on in 1973 before Ginsberg was appointed a justice in 1993. Concerning receiving U.S. military benefits based on gender, the case came at a time when women’s rights were still not an issue taken seriously. Yet, despite being a fierce advocate for women’s rights, Ginsberg still championed for all gender equality. Deng’s admiration for Ginsberg really shines through as she mentions that Ginsberg, recognizing that there is an importance to women’s rights, also still acknowledged that working towards that goal had to be done incrementally and in such a specific way in order to be taken seriously at the time.

“Women’s rights not only affects women,” Deng said. “It also affects men because these harmful stereotypes about the roles that women and men have in society affect everyone.”

Ginsberg and all of her accomplishments are just a hyperlink that lies within another of Deng’s interests: the Supreme Court. Deng first took an interest through constitutional law which she became familiar with through both the political science department and her involvement in moot court; it is also what led her to Ginsberg as well as the myriad of cases she is familiar with at the top of her head. In short, Deng is a living, breathing hyperlink.

“And she graduates top of her class [...] with a baby and sick husband. She can do it all.”

As a senior in high school, Deng perused the political science program and law society at CSULB. Seeing that the law society was recruiting for its moot court --a student group who take on mock roles as litigators facing real issues, problems and cases-- Deng decided to contact the professor in charge. Moot court travels across the country, debates in front of a group of nine mock supreme court justices to argue various cases—both on the side of the state as well as the side of the people. While in high school, Deng became part of the team in May 2018 and this is how her interest in the judiciary branch blossomed.

In the podcast recording room of 22 West’s radio station, Deng and Hure go back-to-back in their shared knowledge about the Supreme Court system and enter a rabbit hole of hyperlinks themselves: from stare decisis and the Slaughter-House Cases to the discourse of non-partisan alignments Supreme Court justices are supposed to uphold.

On the discussion of court legitimacy, the protests currently taking place in Hong Kong are brought up and Deng goes off on China’s judiciary system, which essentially does not exist in terms of legitimacy and power. “The court needs to be legit or people don’t believe them,” Deng said. “People don’t care about the law in certain places and it’s almost an anomaly that we care so much about what the Supreme Court says.” As social and political issues are igniting all over the world today, this holds especially true. Specifically in the United States where the public is losing faith in institutions such as voting and politics in general, it is vital that the government retains legitimacy lest it loses the enthusiasm of young Americans such as Deng who are eager to leave a positive impact on this country.