My Experience at 747 Warehouse Street

An event that centered around “basketball culture,” for fans, by Adidas.

Many sneaker companies flocked to Los Angeles for the 2018 NBA All-Star Game, hosting events to showcase upcoming shoe models and shows for their fans. 747 Warehouse Street by Adidas was a two-day event featuring athlete appearances, t-shirt and jersey customization, exclusive sneaker drops and live music on Feb. 16 and Feb.17.

I received two free tickets for the first night, courtesy of Adidas and Foot Locker, after I purchased the Adidas Harden Vol. 2 basketball shoes a week before release.

The event started at two in the afternoon but I arrived about an hour and a half late due to the intense car and foot traffic. When I parked my car, the first thing I noticed was the size of the event - my view from the fifth floor allowed me to take in the scope of the venue, stretching out over several city blocks.

Another thing I noticed was the “Hu” basketball court, designed by Pharrell Williams. Crowds flocked to the multicolored floor to watch the East vs. West Celebrity Game, the red, yellow and blue vibrant hues a sight to behold in the midst of it all.

I explored the rest of the space and found the MakerLab, a place where attendees could collaborate with Adidas creators. However, it was invite-only and we were promptly turned away. 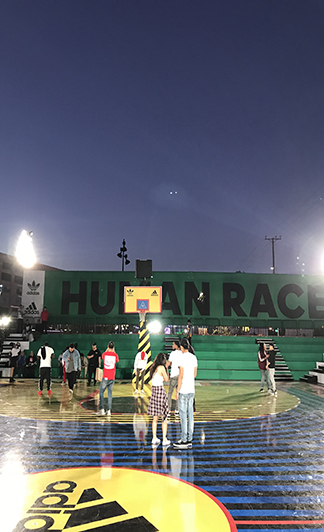 Sulking at the missed opportunity to collaborate with Adidas creators, I walked around the grounds and bumped into a man. It was none other than Toronto Raptors guard and four-time all-star Kyle Lowry! I felt more optimistic as I headed to the Dunk Cam to further drown out the disappointment. The court was especially set up so quasi-ballers can attempt to dunk and being filmed under a high-speed replay camera.

I dunked on my first attempt, which was especially exciting since I got to wear the Crazy Boost You Wear X and be filmed using the new kicks in action. After returning the sneakers, we explored more of the space.

Speaking of sneakers, I was surprised to notice how many people wore Air Jordans, Nike, Under Armour and Vans to an Adidas event. The variety of sneakers worn highlighted the diversity of people in attendance who come from different backgrounds and cultures, coming together and have a fun time.

Furthermore, many opportunities to buy numerous exclusive sneakers were raffled away. The wristband that permitted entry to the event allowed attendees to enter raffles by scanning them at certain zones.

There were two larger designated zones where a majority of the raffle prizes could be scanned and other independent zones scattered throughout the space. From my estimation, hundreds of people lined up to the larger zones with seemingly endless lines.

During a special warehouse tour, I was told how sneakers were made and how the Adidas brand intends to move forward in the future. A specialty exhibit showed how garbage found in the ocean can be used to create sneakers. It was an informative and interesting experience away from the noise and the crowds. 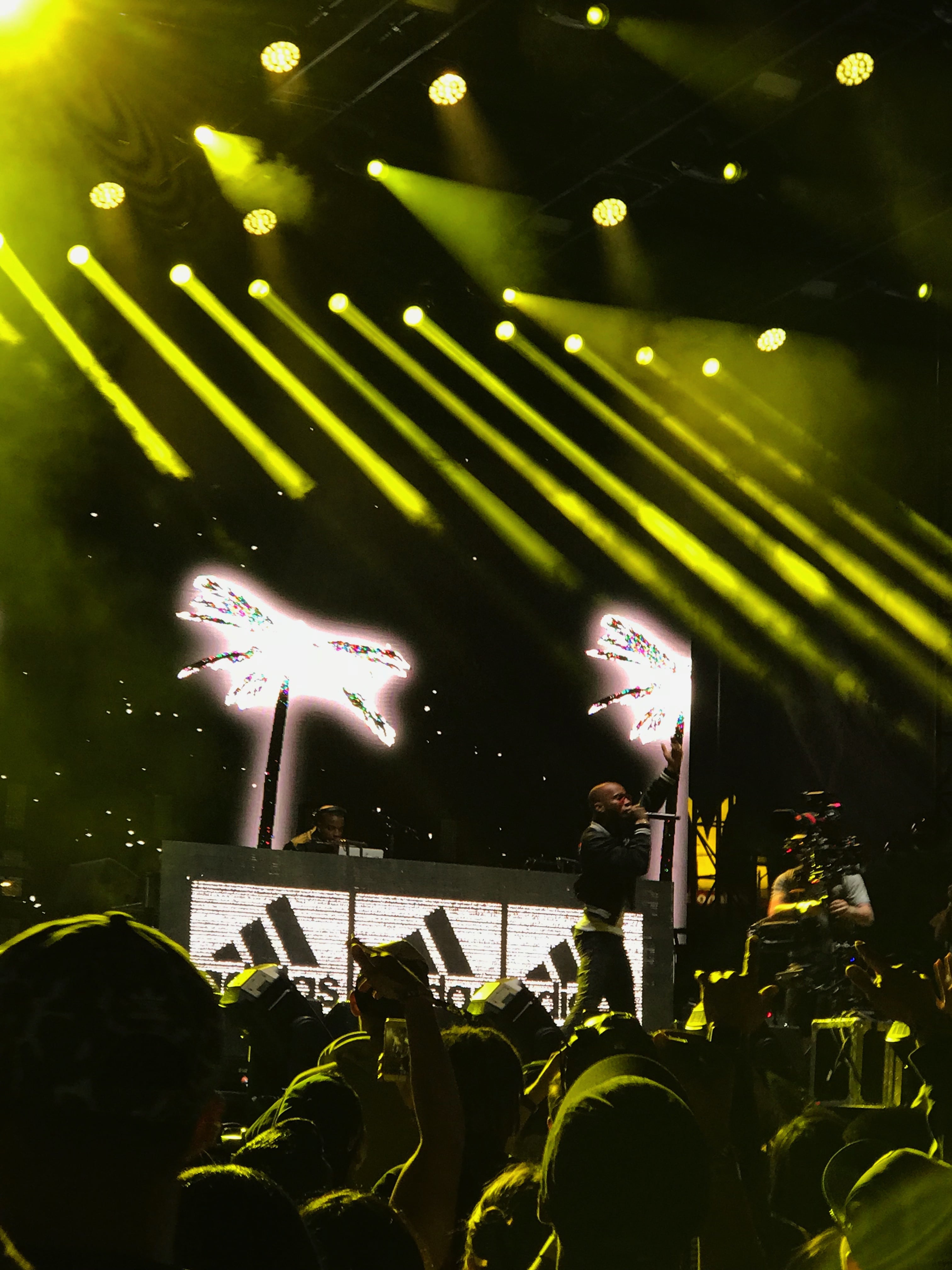 At the end of the tour, I made my way to the stage area where rapper Tory Lanez sang to all the attendees. The performance was my personal highlight of the night. Performing a trio of his songs, Lanez took off his black jacket and white tank top and crowd-surfed to his song “Shooters.”

Being only three to five rows away from Lanez crowd-surfing was awesome, although being pushed and shoved by numerous people trying t to get closer was not. Towards the end of his set, Lanez appeared to get pulled down as his head was grabbed.

He made his way back on stage and promptly dropped the mic. Whether that was part of the set or out of legitimate anger was not clear. Once the set had ended, we headed back to the basketball court.

As we sat there, rapper Pusha T began performing a medley of his songs on stage and although I’m not a fan, when “Runaway” by Kanye West started playing, I really was into it.

Soon after, I decided to go home as exhaustion kicked in. In doing so, we opted not to see Pharrell perform with his group N.E.R.D., as he was scheduled to perform later at night.

Overall, I enjoyed 747 Warehouse Street more than I thought I would. Being around people of different cultures and backgrounds who shared my passion for sneakers, seeing how sneakers are made and being able to attend various free concerts is an unforgettable experience.

Even though sneakers aren’t for everyone,  attending an event like this would be a great experience for anyone.