Once upon a time, there was a little girl dreaming about being a princess. She was watching all her Disney movies and imagined how it would be to live in a castle and wear a crown. But suddenly a group of feminists appear protesting that those princesses are bad role models because they subordinate themself under a man. The girl was puzzled. After all, she loved her princesses. Is being like them a bad thing?

Let’s take a closer look at this, starting with the first princess Disney movie: “Snow White and the Seven Dwarfs.” The little princess is either cleaning, cooking or singing about how she wants to find the love of her life. She does not necessarily show intelligence when she accepts the evil queen's apple and literally sleeps until the prince saves her. One can call that passive behavior. The movie is based on a German fairy tale by the Brothers Grimm from the 19th century — a time where women weren’t allowed to work, possess property or vote. How can we blame the Brothers Grimm for not portraying an independent woman?

You can still blame Disney though. After all, the movie was published over 100 years after the original story. Just keep in mind that in 1937, the equal rights of women stopped right after their right to vote. It took the United States government 27 years to pass bills that guaranteed equal wages and ban sexual discrimination. During that time, Disney released two more princess movies that are based on fairy tales. “Cinderella” and “Sleeping Beauty” don’t really convey a picture of a strong woman either. Princess Aurora, for example, sleeps while her prince Phillip is fighting dragons for the better part of the film. The overall lesson of the first three Disney princesses seems to be that being beautiful is all that matters, because if you’re beautiful you then become a princess, and that is all a girl should desire.

That is not how I want to be, thought our little girl. Lucky for her, she doesn’t have to. She does not live in 1937 and therefore has more tempting prospects for her life.

Lucky for all of us, Disney moved on and its next generation of princesses were strong-minded and fought for their goals. Ariel rebels against her father and goes off to win over her prince. Belle loves reading and turns down the proposal of Gaston.

At this point, the feminist group in the background starts shouting: Belle is staying with a man who imprisoned her and Ariel changes her whole life only for the love of a man.

They do have a point. It seems like those princesses are not so independent after all. We are in the 1990's right now. Women at this time went to college and actually had jobs,  but also stayed at home and took care of the children while husbands supported the family. Ariel and Belle fit perfectly into the distribution of roles at this time. 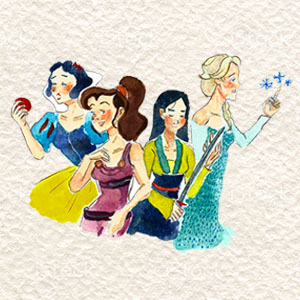 There is one princess from this time who still stands out today. To be accurate, she is not a real princess. Her movie wasn’t successful enough, which is why Disney decided to reject her participation in its exclusive club of princesses. Her name is Meg and she is the first unchaste Disney character. She is not waiting for a man but tries to deny her feelings for Hercules, and she even works with the villain in the movie. Pretty badass, right? Get used to it; from now on this description fits almost every single Disney Princess.

Mulan, for example, dresses up as a man and fights for the honor of her family. You want a princess in action? Here it is — not sleeping nor waiting for a man. In fact, the romance in the movie happens kind of accidentally. Mulan is a princess who is ahead of her time.

Almost 50 years after the first three princess movies, Disney is taking another shot on Grimm’s fairy tales with “Tangled” and “The Princess and the Frog.” They changed the original stories, which is nothing new. They have historically always done this, otherwise the evil queen in Snow White would have eaten the heart that the hunter delivered to her, which she would have thought was her stepdaughter’s. One can see that there are good reasons why Disney changed the stories, but this time they changed the fairy tales substantially for the benefit of the women. Rapunzel is not waiting for the prince in her tower anymore, rather, she escapes to find her destiny. Tiana is the first dark-skinned Disney princess and, unlike her fairytale counterpart, she actually has to fight to break the spell that turned her and the prince into frogs. What do you say now, feminists?

The Disney princess story goes on and the modern generation of princesses isn't focused on a man anymore. Moana and Merida are getting their happy endings all without a romance. “Frozen” shows the first break up in Disney princess history and rejects the fairy tale of love at first sight. Next to the sisters Elsa and Anna, the men seem timid and insecure.

But the best characteristic of our new power princesses is that they are not just fighting for their own destiny, but for the welfare of whole nations. They are not small, powerless girls anymore but leaders and queens. Moana, Elsa and Anna stand up for the environment and try to make up for the mistakes male rulers made in the past. Is this Disney’s version of the Fridays for Future movement, where students all over Europe are protesting against climate change? In this case, Elsa would probably be Greta Thunberg. But beside those somehow wild interpretations, Disney managed to create princesses that actually can be role models for girls: women that are not only making truly independent choices, but also taking on responsibilities.

What comes next? That is heavily speculated since the release of the second “Frozen” movie. A fan theory states that Elsa is actually gay, based on the fact that the ice queen never showed any interest in men, but seemed to get along a little bit too good with this one girl at the bonfire. Who knows: maybe Disney is going to introduce their first gay princess in a third “Frozen” movie. It would show once more that Disney princesses are developing, just as society does.

Our little girl nodded in confirmation. She was not puzzled anymore, but knew exactly what to do. “So what? I always wanted to be more like Anna anyway,” she replied to the feminists, who backed off slowly. And with this she put a crown on her head and lived happily ever after.