Hey y’all. I’m Bailey, and I’ll be your editor-in-chief for the next year here at 22 West Magazine — and what a year it’s going to be. Here at 22 West Media, we strive to give students the best of three worlds, offering them professional experience in the fields of radio, video and magazine production.

If you like writing, drawing, taking photos, designing graphics, critiquing other people’s work or any mixture in between, this magazine is the place for you. Getting involved is as easy as walking through the door. That’s what I did almost three years ago.

Now I run our magazine, which means that if an editor even so much as stubs their toe on a desk, I’m technically responsible. My job also includes looking at the issue before it goes to print, helping out with design and writing, coming up with feature ideas, assigning those feature ideas to writers — well, I’m running out of space.

But Bailey, you might ask, what do you do when you’re not working?

I still keep writing, but not for the magazine. Short stories and the occasional not-so-short story are my thing. Is writing your thing? Stop by USU 116 and let’s make it official.

Hello, my name is Jason Lauckner. I am Chief Executive Producer at 22 West Video. For the past three years I’ve worked as the executive producer of a late night variety show called Late Night Long Beach, which gave me a lot of the skills that have transferred to my current job.

Being the chief executive producer of 22 West Video entails providing overall direction and representation for the company along with establishing an innovative environment in which my staff and volunteers can grow.

My goal for 22 West Media this year is really to provide a professional-level experience for incoming volunteers while also creating a welcoming community in which people are creatively inspired to make content. On top of that, I want 22 West Media to start having traction and to head in the direction of becoming a key source of culture in the Long Beach area.

Hey. I’m Ennovy, a Journalism/Public Relations senior and the General Manager here at 22 West Radio. My radio journey began while interning with 88.1 KJAZZ during my first year of undergrad and is ending here as General Manager. I started working at KBeach in the fall of 2016 as the Marketing/ Events Manager and Co-Program Director.

After dedicating long hours and weekends to meetings, events and monitoring the air waves, I was promoted to Assistant General Manager in the spring of 2017. This position gave me the overarching task of maintaining order and following up on commitments. Once that position came to term, I was given the opportunity to apply for Station General Manager.

As GM I have taken on this role nervous, excited and prepared to lay the foundation for our new brand, 22 West Radio. In just one year of dedication, my experience has prepared me for the fast-paced world of digital broadcast media, event planning and management. I recommend that any student who is looking for both a community and an out-of-classroom learning opportunity join us here at 22 West Media.

I’m Israel Rivera. I’m studying film with an emphasis in editing. I’ve been in love with film since I was a kid going to the movies with my dad every other weekend in Los Angeles, but I first became interested in the actual film making process my junior year of high school in a class that covered the basics of digital film.

Finding that I gravitated toward editing, I joined the school video team and when I got to college, I immediately looked for an opportunity to improve my editing skills.

I found a home in 22 West Video (formerly College Beat TV), where I am now a paid staff editor. 22 West Video provides students who are interested in creating video content with a wonderful learning environment. I’ve made great friends here and learned a lot more than I ever would have on my own.

My name is Davis Stewart and I am a marketing major here at CSULB. All throughout my teens I was heavily involved in the local music scene. Whether it was playing in bands or throwing shows with my friends, I always had a hand in artistic events around me.

Naturally, when I entered my college years I began looking for a space that would support my creativity and allow me to express myself. 22 West Media provides an outlet for me to do just that. I am able to bring my love of the local art scene onto campus and build a resume for a future career in the music industry. In the coming years, I hope to use my position as Marketing and Events Manager to expand 22 West Media as a platform for local and underrepresented artists.

Hi there! My name is Kaila-Marie and I’m the managing editor for 22 West Magazine. My job is to manage the magazine team, meaning that I’m the one who ensures each page has enough articles and photos, and overall that each editor has what they need to create a kick-ass page. I’m also the one who calms Bailey down when she’s stressed (you might think I’m kidding, but it’s real).

If you’re interested in writing or editing (we’re looking for a community and news editor — *hint hint*), or if you want to view memes in a group setting, come on by! 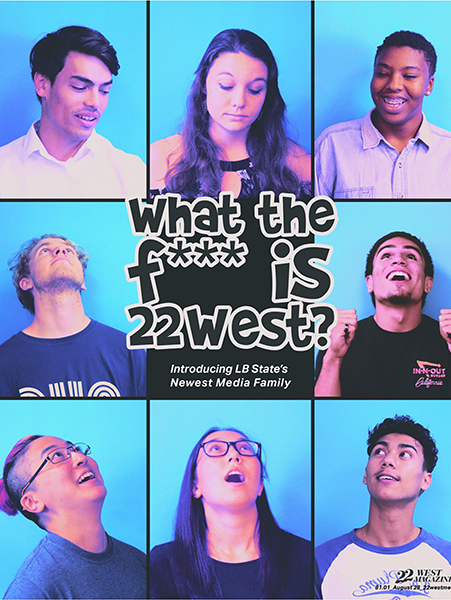 Hey, I’m Katie, an executive producer for 22 West Video in charge of the upcoming fictional anthology series, Long Night Ahead. The series will aim to provide a dark, inquisitive look into the semester’s chosen theme. This semester, the series is focused around impossible situations with no hope of a happy ending. The show’s emphasis is collaboration, learning and ambitious filmmaking, and I’m excited to meet anyone interested in joining me to help make something great.

Like my show, my tastes run toward the darker side of the spectrum. I’m a fan of Hannibal, Game of Thrones, Dexter, White Collar, the Saw series and Christopher Nolan films. I’m an aspiring writer and assistant director who can’t stop spending money on food, especially boba. I love Excel and scheduling is a passion. I’m also a pizza delivery driver and I love blasting country radio in my car.

22 West is a great group of friends united by similar passions who want to hang out and enjoy college while working hard to make quality, creative content. If you’re looking for something similar, stop by the 22West Media offices and say hello!

Hey, I’m Jess, and I’m the multimedia manager at 22 West Magazine. I’m big into the nuances of online media, and I’m a budding video and podcast producer. One time I wrote a parody of a Mountain Goats song in service of an internet show about harassing Nintendo of America on Twitter, which is, I guess, a fun fact. I’m here to supplement pieces from the magazine with some audiovisual spice. If you like overly ambitious little projects and meeting new people, we’re gonna get it all cooking.

There will be both content that accompanies articles for the magazine and stuff that stands alone. For instance, in the works is a series about people’s passions, and an actual play tabletop show. I’ve got dreams of experimenting with livestreams, audio storytelling and interactive work, so come by, catch me with the pink hair, and we’ll all just fly toward the sun — the sun being endless hours of editing.