It's Been a Book Boy Summer

Well, summer is drawing to a close and so too is my extra reading time.

To me, summer is characterized by what seems like an abundance of time till it starts passing. My aspirations started with getting more than 600 hundred pages into “Infinite Jest,” attempting to annotate Hegel’s “Phenomenology of Spirit,” getting around to “Notes from Underground,” and other English majoree goals. Instead, I wasted seemingly unlimited time on old favorites and newer works. 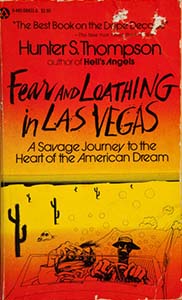 “Fear and Loathing in Las Vegas”

There’s no way I’m the first one to recommend Hunter S. Thompson’s “Fear and Loathing in Las Vegas.” It’s a trope for everyone from critics of americana, would-be journalist, and narcotics enthusiast to have some amount of admiration for Thompson’s take on the American dream.

In case you’ve been out of the loop though, “Fear and Loathing” is a dubiously autobiographical account of Thompson’s (alias Raul Duke, doctor of journalism) and his sidekick/lawyer Dr. Gonzo’s, search for the American dream in ether-drenched road trips, acid fried casinos and Las Vegas hotel bars pulsing under adrenochrome.

While Fear and Loathing has some semblance of a plot, it basically consists of a loosely-assembled series of events starting with the trek from LA to Las Vegas, our two protagonists flaying about the strip in psychotropic paranoia and ending with amyls to come down and bear a flight out of Vegas.

Of course, it’s impossible to discuss “Fear and Loathing” without touching on it’s 1971 setting and the escalating war on drugs. One image that sticks for me is near the beginning as Raul and Dr. Gonzo speed past a billboard listing the minimum sentencing for marijuana possession being 20 years and life for intent to sale in Nevada. It’s a striking contrast to our present where only a dozen states fully criminalize weed, our president sings the praises of a ketamine-derived drug (esketamine) and psilocybin mushrooms being decriminalized in Oakland and Denver.

But we have to ask whether our attitudes towards narcotics have changed since the Thompson’s hazily documented ‘71 or simply shifted and been co-opted by the center of power.

It may come across as passe to write on how class consciousness impacts writers and their fiction, but I’m on a roll so here’s Kurt Vonnegut’s indictment of the one percent.

Vonnegut’s “God Bless You Mr. Rosewater” follows the antics of Elliot Rosewater as he attempts to rid himself of the fortune connected to his family name. Elliot, who grew a conscious through volunteer fire fighting and throwing away cash, is shackled with guilt after abandoning the conquest of leveraging his wealth to make more of it to support a declining Indiana town.

Though Elliot is the protagonist, his lack of agency allows the secondary characters to step into the foreground and question who has the right to Elliot’s wealth.

There’s Elliot’s father, a conservative congressman seeking to reform Elliot to produce an heir to the fortune. Norman Mushari, an upstart lawyer seeking to declare Eliot insane, rob him of the fortune, and establish a lost member of the Rosewater family as the rightful heir. And finally there’s that Indiana township who claimed Elliot as their own after he created a sort of social safety net for the town.

That’s pretty much the extent of the plot, Elliot goes from having his fortune to not. What keeps the whole thing afloat are Vonnegut’s punchy prose and layered storytelling around how generational wealth concentrates and then stagnates. Elliot also has a certain boozer’s charisma that makes him endearing despite how undeserving the narrative point of view reveals him to be.

Overall, it’s a highlight in Vonnegut’s canon and deserves to be considered alongside  “Breakfast of Champions” and “Slaughterhouse Five.”

“Freedom” follows a family of upper-class suburbanites, the Berglunds, as they tear themselves apart through infidelity,  ennui, angst, defrauding the US military, getting in bed with coal companies and the limitations of freedom.

For as much guff as I’m about to give Jonathan Franzen, I have to admit that he can write an engrossing novel, even if I might hate it. The first chapter being narrated from a gossipy third-person point of view of the Berglund’s neighbors, a stunning series of autobiographical chapters as bookends, a magnificent monologue on the absurdity of celebrity opinion, and an extramarital indiscretion complicated by passing a swallowed wedding ring (yes, you read that right) all leave me wishing the novel’s focus wasn’t so myopic.

Perhaps I’m criticizing Franzen for a feat he wasn’t seeking to accomplish, but the lack of material relatability outside of a few passages leaves me somewhat bitter. The titular freedom portrayed by Franzen is really only held by a twenty-first-century American bourgeoisie, and the novel seems to at best pay centrist lip services to the ills of a post 9/11 United States and at worst brushes off the impact of the 2008 financial crisis.

But don’t let me dissuade you from picking up “Freedom.” It’s an exceptionally complex, emotionally impactful, and life-affirming read—just don’t be surprised if all its fantastic character drama and plotting feels empty by the end.