Story and photos by Nathan Rusiniak

Wild cartoonish eyes peer from the corner, across the room oil tankers blaze and in the building next door pillars of busy colors encapsulate symbolism; all of these are submissions from masters in fine arts students.

These pieces and more are part of graduate critique week, which will be available in the galleries situated between the Fine Arts  buildings three and four from 4 pm to 7 pm at Long Beach State.

“I like juxtaposing two opposing feelings to create a new one,” Aaron Brown said, a 34-year-old illustration/animation major.

The intangible becoming tangible is what Brown desires for his work, a sort of manifestation of the inner spirit. 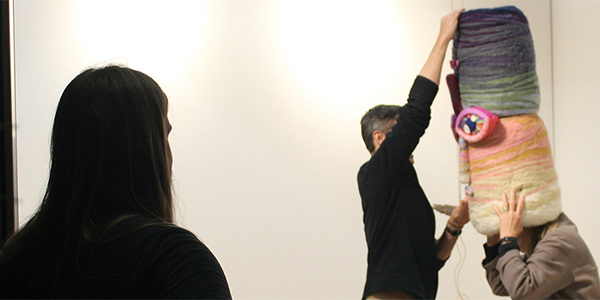 Brown spent three weeks crafting a wearable sculpture from wool, foam, fabric and mirrors that are situated within the piece.

“It can be funny, grotesque or uncomfortable. That’s how I communicate with the world,” Brown said.

To step away from the metaphysical and towards understanding the physical is what Mirabel Wigon, a 28-year-old drawing and painting major, had in mind for her painting “Porcupine Hill.”

“It’s the idea of cityscape being a labyrinth, the resources become the constructed environment,” Wigon said.

Inspired by historic photographs of Signal Hill, the scene represents a land belonging to indigenous people until the discovery of oil beneath the soil attracted outsiders and instigated a population boom, Wigon said. 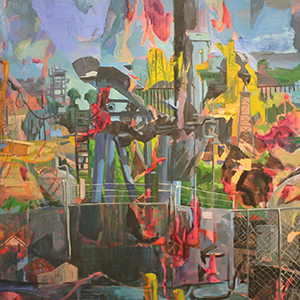 The piece’s design is meant for the audience member to visually peel back the layers to see what’s going on, Wigon said, a chance for them to grapple with the environment.

For a dramatic change, Dede Falcone, a 46-year-old drawing and painting major, wants her viewers to look introspectively at their own identity.

What the audience can see is two looming pillars of dark colors, that almost resemble a pattern of white noise, concealing a thin line of compartmentalized squares. 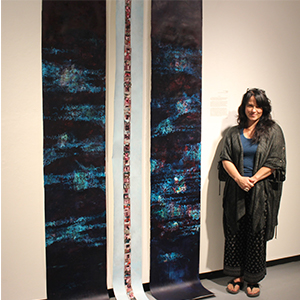 “I hope [the audiences] find how well they balance true self with public self,” said Dede Falcone.

Her goal for the piece was to show that nobody is completely one dimensional with the balancing of so many roles, Falcone said.

Falcone hopes that “Body/Mind” inspires people to realize what they can be beyond the political forces that bind them.

Almost a year ago Falcone had flown from Seattle to Long Beach during last year’s graduate critique week to be interviewed for admittance to the MFA program. She chuckles admitting that it’s this event’s anniversary as her piece hangs in the gallery.

All artists mentioned a desire to teach art after graduation from the MFA program at CSULB.