This week’s series of student art exhibits featured, among other pieces, sculptures inspired by objects from childhood, such as piggy banks and stuffed animals.

Sunday, October 27 was the ninth opening reception this semester for the weekly rotating installations in the School of Art Galleries. This weekend’s reception was marked by metal and jewelry exhibitions in the Dutzi and Werby galleries, sculpture in Merlin, ceramics in Gatov East, and a graphic design group exhibition in Gatov West. The grouping of five student galleries also played as a reception area for friends, family and viewers of the students’ work on display on Sunday night. 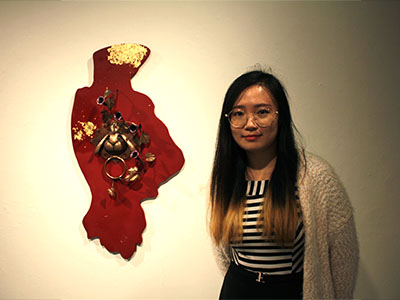 Yucen Liu, a third year Masters of Fine Arts exhibiting a metals and jewelry non-degree show, described the focus of her current exhibit in the Werby Student Art Gallery as embracing childhood memories through recreating the figures of animals.

“The inspiration for the animals is from my parents. I’m the only child in my family, so they got me all the stuffed animals. They’re like companions,” Liu said.

From the figure of the stuffed animal and its reappearance in her work, Liu stated that she draws a sense of love, security and “all that stuff” from the memory imbued into those figures. 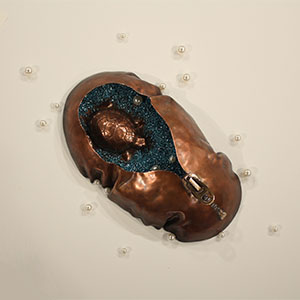 “It’s like my comfort, so I use animals to carry my stories,” Liu said.

Diana Alvarado, a senior in the Bachelors of Fine Arts program in ceramics presenting this week in the Gatov East Student Art Gallery, describes her work as drawing from traditional pottery with her own twist. Several of the works Alvarado explained as being inspired by piggy banks she saw lined up at Tijuana markets as a child.

“As a kid [piggy banks] were relevant to what’s on TV or what’s mainstream,” Alvarado said. “It’s beautiful, it’s colorful, it’s playful, so I think I’m drawn to those qualities in objects.”

Alvarado describes her connection to Tijuana coming out of her childhood, family visits to see the area with her Dad and a sense that Tijuana is closer to home than some parts of Los Angeles.

“LA’s not Mexico,” Alvarado said. “You know, there’s areas dedicated to places inspired by the marketplaces, like Olvera Street, but when you’re there the energy is just really different.”

Before applying to an MFA program, Yucen Liu described scouting out other metal and jewelry programs in Southern California. Liu eventually settled on CSULB as the best program for fine metals and jewelry making due to the quality of equipment and the number of kilns.

“All the equipment here is so amazing,” Liu said. “I found I have more opportunity and possibilities to make more, improve my skill level and to make more challenging stuff.”

Liu hopes to land a teaching position at an art center after her MFA. 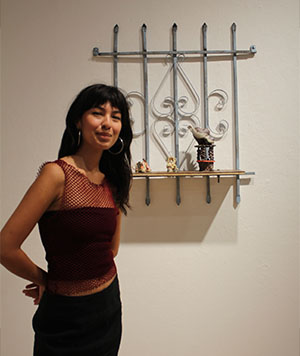 For Diana Alvarado, she described the allure of CSULB’s ceramics program as a sense of community in the program. Alvarado characterized it as a need for each other “in order to make things happen” even just down to ceramics being a physically heavy material.

“I’ve been in other places, I’ve gone to other community colleges where everyone, maybe, doesn’t feel as united,” Alvarado said. “We have dinner together, we go out together, we support each other, we give each other feedback.” 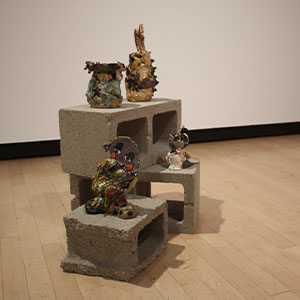 After graduation, Alvardo said she hopes to continue working and developing her practice since she feels that she’s “just scratching the surface” and that “two years isn’t that long and ceramics is such a special material that you can’t just understand it overnight.”

Both Diana Alvarado and Yucen Liu’s exhibits will be on display at the School of Art Galleries from October 27 to 31.