I met Cocoa when he was two. His face, brown on the right side, white on the other like a perfect phantom mask, he came over the fence to lick my face.

My new boyfriend, Scott, introduced us and the dog became my constant companion. I trained him off leash and he spent the next eight years at my left heel, looking up at me every 20 seconds or so for direction and approval. We became fixtures at the West Hollywood Coffee Bean & Tea Leaf where I would write every morning.

We were a tight fit in my 400 square foot apartment which included my 6-foot-4-inch partner, myself, a 100-pound Labrador and a 10-pound cat. Cocoa was the most excited when we moved to Inglewood. The squirrels, rabbits and other dogs became Cocoa’s playmates, though the squirrels weren’t down for it as much as the other dogs. His bark, “Ah-roo-roo-roo!,” became our rally cry. 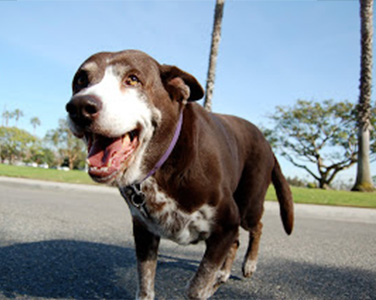 But he was more than just my companion. For five years during the recession, when I wasn’t working, he was my relief from anxiety. When life would weigh heavy, I would bury my nose in his fur and cling to the planet, hoping to make it another day. Sometimes when he’d feel my worry, he’d grab his leash. “I got this,” he seemed to suggest, “let’s walk it off.” There were days when we’d walk the blues away half a dozen times.

When I finally got a job at KJazz Radio, his company at the office compensated for a low salary. When I worked as an operations manager and a distraught employee wanted a meeting, I’d hand them Cocoa’s leash and he would lead them outside for a squirrel chase. No matter the mood, the employee always returned calm and less stressed. Cocoa was rewarded with treats from Maryann, the finance office admin he spent most of the day with. I pretended not to notice the extra calories. It was obvious he had enough love for both of us.

A neighbor called me Saint Francis of Assisi, known as the patron saint of animals.

When Scott and I eventually parted ways, he asked, “What about Cocoa?” even though he already knew the answer. And to his credit, he allowed our dog to remain with me. Scott moved out and we shared custody from that day forward.
When Cocoa became afflicted with hind leg issues, I stepped up. I supported his back legs by holding him from his ample tail and he spent a year ambling along while I held him up. Two new four-legged roommates, feral cats that adopted the household, would come along on the walks, darting from car to car in the street alongside the sidewalk, the entire pack off leash and in step. A neighbor called me Saint Francis of Assisi, known as the patron saint of animals.

As the days became more and more labored, I dreaded what I came to call the last act of a faithful dog owner. I asked friends when it would be time to put him down. “Don’t worry,” they assured. “You’ll know.”  And they were right.

He was less and less active on our trips to the dog park. That last trip told me what I didn’t want to accept. At the park, other dogs came over, took one sniff and left him alone. They knew, they could smell it. I took him home, and he never got up from the kitchen floor again.

I called Scott, I wanted him there. I called the vet and he came too. We put him on his favorite bed, cuddled his face and kissed him while the vet did his duty until Cocoa’s labored breathing slowed to silence. No words, only deep, deep feelings. I sat stunned by grief until the cats began meowing and scratching at the door. I was jolted by the realization that his walk had become theirs too. Life, however, goes on and I had to walk the cats. On our circle around the block, the neighbor who likened me to Saint Francis said, “Where’s Cocoa?” When I told her, she erupted into tears, unleashing mine. We cried together for a few minutes and it helped to know that others would miss him too.

It’s been five years and I still haven’t been able to take his picture off of my screen saver.

It’s been five years and I still haven’t been able to take his picture off of my screen saver. More cats have shown up to be cared for – I’ve GOT to keep that patio door closed! – but I’ve not had another dog since. I still miss his deep baritone bark, but every time I remember him and feel him in my heart, I am reminded of a poem by Ernest Montague that I read after his passing: “When you think your dog has died, it has just fallen asleep in your heart. And by the way, it is wagging its tail madly, you see, and that’s why your chest hurts so much and you cry all the time.”