You know what Jeff, by Marisa Espiritu

No one liked my uncle, especially my dad. One Christmas, we made the mistake of leaving them in a room together.  Sitting with my aunties watching the little kids play, we’re distracted by a commotion down the hall. Everyone runs for the disaster brewing in the other room with a toddler in hand.

You're doing it for grandma, by Bria Manning 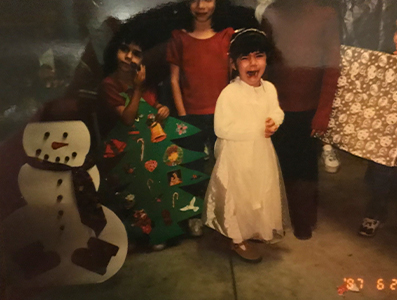 Yup, that picture is me. You’re probably wondering how I got there.

It all began when my mom forced the halo on my unhallowed 5-year-old head. I would be playing the role of the angel in the Nativity scene for a family play.

I figured sheepishness would be the best strategy to get out of this situation but when I acted uncharacteristically so, I got a stern “You’re doing this for grandma!” to shoot me down.

I joined my cousins outside and, though I had a calculated plan to get out of it, I lost my shit. Maybe it was seeing my forlorn-looking cousin dressed as a present or the chorus of “Ay muy bonita!” to cheer my sorry ass up, but the panic attack happened and it triggered others. The present, baby Jesus, one of the wise men and the sheep joined me in tears, snot and screaming unison, thus putting an end to all future embarrassing child-related performances.

Do you remember the whole thing about ending up on Santa’s naughty list and getting coal in your stocking for Christmas?

My parents took that to heart one year. This specific year both my brother and I were exceptionally naughty, but I don’t remember what specifically we did. However, when we woke up on Christmas morning and went into the living room, we found our stockings filled with dried-up bamboo sticks and wood chips.

Naturally, we started crying. After a few minutes, my parents said they called Santa and made arrangements to return the “bad kid” gifts in favor of our real gifts: some clothes, toys and a brand new bike.

I’m so glad this was all before the era of YouTube, because there is video evidence of this year. Maybe at some point, I’ll get that digitized. Who knows, it may go viral.

Schnaps for the season, Janna Wolf

In my small town in Germany we’ve got this funny little tradition. The evening before Christmas Eve, crowds of people move from house to house doing something called Christmas tree praise. The rules of the game are simple. First visit your neighbor and praise his Christmas tree. Second, drink a shot with your neighbor, preferably from his homemade schnaps. Third, move together to the next house in the street. Steps one to three can be repeated as often as you like, but the game might end abruptly if you mention that a tree is crooked or looks bare. (Even if it’s true.) People may ask what’s the meaning of this tradition and the truth is that nobody really knows. They just keep doing it year after year to show off their trees, to get some free liquor or maybe just to get together during Christmas time.

Santa's got your number, Isaac Gordon

I love Christmas music, an awesome subgenre of music that I play all year. The wacky stuff at the far end of the spectrum, that’s the best kind! But there’s one song that pushes the boundaries too far and brings holiday cheer to a dark commercial pit from which it may never return. Tommy Tutone’s 80s hit “867-5309/Jenny” was reworked by none other than Tutone himself into the absolute dumpster fire of a song, “867-5309/Santa.” The first seven seconds are bearable, with sleigh bells layered over the familiar guitar riff. It goes sour when Tommy then yells “Ho-Ho!” to bring the beat in. I can’t tell you the formula for a holiday hit, but it’s certainly not take a mildly popular 80s track, steal the lyrics from “Santa Claus is Coming to Town” to go on top and release that single. Please listen to The Beach Boys’ “Little Saint Nick” instead.