He elegantly balances over the tree trunk and presents his hairy butt confidently to the camera. The post has almost 5,000 likes on Instagram and the influencer gets a lot of compliments for his backside in the comments. Before the image in your head becomes too vivid, this story is about a dog—a corgi to be exact. Aqua is a so-called “petfluencer.” It may be hard to understand the enthusiasm for a dog’s butt, but the universe of petfluencers has its own rules and the furry backside of a corgi can be quite popular according to #corgibutt.

Aqua does not seem to care that he has over 144,000 followers on Instagram and is a small celebrity. His owner, Kay Morikawa, talks about the fluffy herd dog’s career while he snoozes under the table.

“All my friends started to have babies and they started to post their babies’ pictures on Facebook. I got annoyed,” Morikawa said. “That’s why I started an account for my dog.” 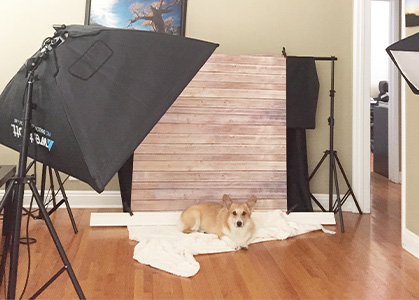 She uses the publicity of the account for her work as a photographer. “Half of my account is for my satisfaction,” Morikawa said. “And the other half is to get connections for my photography business. When Aqua gets some jobs, that is great too.” Her four-legged friend has his own merchandise and hashtags for special characteristics like his love of balls, #AquaAndAYellowBall and his aversion to water, #NoAquaForAqua.

This corgi belongs to the first generation of Los Angeles’ petfluencers. Aqua’s Instagram account was started seven years ago. According to Morikawa, it was much easier back then because there was no competition. Today there are many more petfluencers, and puppies are especially popular.

This is proven by Mortimer, an English bulldog from Long Beach, whose owner Wendy Healy started their Instagram account when he was eight weeks old. In the past one and a half years, Healy has documented Mortimer’s growth in pictures and videos. Today he has 25,000 followers.

Mortimer is also sponsored by several companies and, amongst other things, she is also doing a photoshoot for dog clothing in January. “We are still getting a name out there,” Healy said. While Mortimer enjoys his lazy dog life, his owner has to work hard for success. Healy reports that in addition to the everyday posting, she has to do stories and engage with her followers and other influencers. 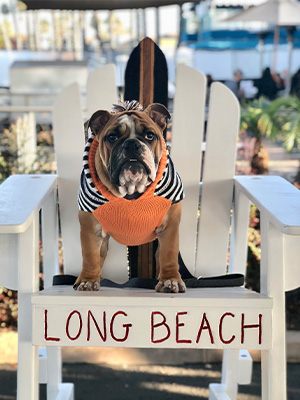 She is working full-time and Instagram is supposed to be a hobby for her, but still sometimes feels pressured. “If I go for a couple of days without posting, I get messages like ‘is everything okay?’” Healy said.

“It’s more than a full-time job,” Morikawa said. Interacting with other influencers is particularly important. Not the number of followers, but the engagement—the likes and comments—is what matters in the end.

It’s no wonder that petfluencers are closely networked with each other. In the community, there is not only a widespread passion for corgi butts, but they have also developed their own language for their postings; the words “fur” and “paw” are frequently used. Instead of friends, “furiends” are coming to a “pawty.” Humans are called “hoomans”. Of course, there are special events and meetings for the animal internet celebrities—just like for “hooman” bloggers.

For Matt Elias, owner of the French bulldog petfluencer Pierre, this is going too far. “Some of those people they think they are famous, but it’s just their dog. That is really weird.”

His Instagram account has almost 17,000 followers. Nevertheless, it is still a fun hobby for him. Sponsored partnerships are too much work. He doesn’t feel the pressure and posts whenever it works for him. He also loves to dress Pierre to match his favorite movie characters. For “Back to the Future” Day in 2015, he even built a small DeLorean for the bulldog. Pierre is a “serial chiller” and used to costumes. But unlike Mortimer or Aqua, Pierre really is a working dog. In addition to his petfluencer existence, he is also a therapy dog, who helps people to relax at LAX and the Children’s Hospital. 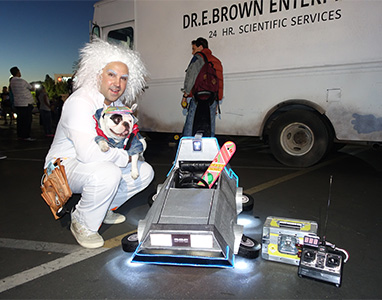 “Anywhere he is getting attention, he likes,” Elias said. This attribute not only makes him a good therapy dog, but also the perfect influencer.

Pierre is already used to being on camera. That’s simply a part of life for an animal influencer. Every owner has their own trick to get a good shot of their canine protégé. For Pierre, a squeaky toy mostly works out, Mortimer’s attention can be caught with a treat and Aqua’s attention always gets caught by his beloved ball. Morikawa even trained Aqua to look into the camera on command. She shows how well this works on the spot: with the commands “stay” and “back” she brings Aqua in front of the scenery in position. At first the corgi is distracted, but the moment Morikawa lifts the phone, the experienced petfluencer knows what to do and looks purposefully into the lens. As soon as he hears the click of the camera, he scurries on. Photo is shot – job is done.