A Valentine’s Date with the Blue Blur

Nothing could beat the feeling of being with the person you love on the most romantic day of the year. Of course, this doesn’t discredit the other 364 days of the year for your significant other to show you their love, but that’s beside the point. What’s important is to take advantage of a romantic day like Valentine's to go over the top in cheesiness to show that special someone how much you care.

If you’re having a bit of difficulty setting the scene for a perfect Valentine’s date, picture this:

You’re with the person you love most.

A strong gust of wind breezes by.

you feel a spark.

And as you hear the sound of a heart beating at a speed that’s almost alien, you see a gold ring.

You may be thinking of a new beginning, of love and companionship.

And if that’s the case, you are absolutely correct.

That’s right folks, what you are picturing is a scene from the “Sonic the Hedgehog” movie. 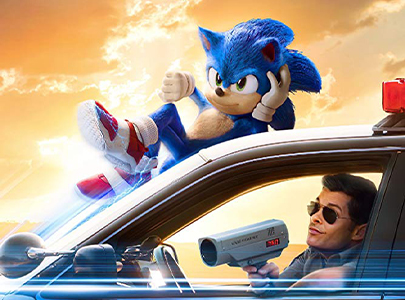 On a day that’s typically veiled in shades of pink and red, a dash of blue has suddenly entered the picture—whether you like it or not.

After all, what else is there to do but watch the most romantic film of the new decade.

Push Ryan Gosling's tearful “Notebook” aside, because “Sonic The Hedgehog” has officially entered the chat.

Surpassing “Detective Pikachu” during its opening weekend, “Sonic the Hedgehog” earned $57 million at the box office while the former fell behind, only bringing in $54 million.

However, its success doesn’t cover up the bumpy beginnings of the video game-turned-film.

After the first teaser was dropped in April of last year, there was a loud and immediate outcry from fans begging the producers of the film to reconsider the design of their beloved blue blur.

With enough cyber-bullying, the producers caved and fans succeeded by being met with a delayed premiere date and a more pleasing blue hog to look at.

The movie is aimed towards a generally younger audience, easily figured out by the flatulence jokes and the silly mannerisms of Jim Carrey, who plays Jim Carrey, dressed as Dr. Robotnik

The film follows the iconic Sonic, a hedgehog who has the unique ability to run at an extreme speed, as he struggles to navigate life on Earth. When an accidental slip up exposes the lonesome blue fiend, he partners up with his newfound human friend Tom Wachowski, in an effort to escape Dr. Robotnik, a crazed evil scientist who wants to exploit Sonic’s powers for evil.

Sonic the Hedgehog was first introduced in 1991 with the release of his very own game on the Sega Genesis console. He was created by Yuji Naka and Naoto Ohshima in order to compete against the ever-popular Mario character created by Nintendo.

As one of the biggest icons of the videogame industry and a figure with a wide variety of adaptations, the “Sonic the Hedgehog” film provides Easter eggs that will have any avid fan pointing towards the screen in excitement.

Some references include a brief nod to Sonic Underground, the blue blur’s love for chili dogs, and the Green Hill Zone theme song playing in the very beginning of the film.

With that being said, whether or not you take the chance to go see Sonic in theatres, there is no doubt that the biggest romantic gesture your partner could make is to willingly sit through this movie just to see you point at a screen and smile as the childhood memories of staying up late to beat level after level flood in.