"The Good Place" & The New Afterlife

After four years of unexpected plot twists and comedy gold, “The Good Place” has decided to not overstay its welcome and reached an end that has left most fans satisfied, including myself. This show has revolutionized modern television comedy from start to finish. This is a take from a completely biased follower.

Although the show was initially about what happens when the wrong person goes to heaven, it rapidly transformed into a meditation on what it takes to become a good person, and how everyone can become a better person if given the chance to improve. The show constantly evolved into something new and broke barriers by making fun of itself while trying to answer meaningful questions of human existence.

The last episode titled “Whenever You’re Ready” gave the characters and fans a perfect ending. It allowed the characters to resolve all their issues and enjoy their time in heaven. Each member of the group is able to complete their journey and fulfill all their goals. After feeling at peace with themselves they are able to reach the next and final step: to end their existence, because going to paradise is not to be perfectly happy forever, but to leave on your own terms and whenever you’re ready, which is exactly what The Good Place did with this ending. They ended on their own terms and although it is hard to see Team Cockroach go, this ending has given the show what it deserved. 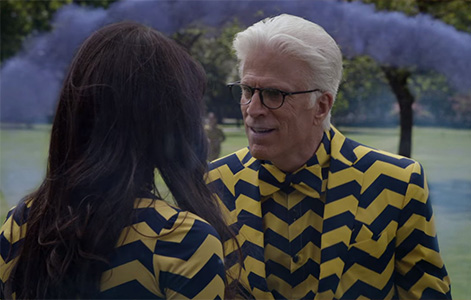 Michael Schur, the creator of “The Good Place,” as well as “Parks and Recreation” and “Brooklyn 99” has a very weird but positive perspective on life that has been reflected in all these shows. Just like the characters of “The Good Place” we see Leslie Knope constantly trying to improve the lives of the residents of Pawnee and failing over and over again, like the time she got recalled, does anyone remember that? However, this never stops her from continuing her mission. The same way we see the members of the 99th precinct trying to make the world a better place, even when other cops and people in power make their lives harder for it.

This last season was less about what it means to be good and more about what it means to be human. The entire season is a fight against the clock in which Eleanor, Chidi, Tahani, Jason, Janet and Michael are trying to prove to everyone (including themselves) that being human is constantly trying to be better, failing on many occasions (some more than others I might add) but eventually become better versions of themselves.

If you want a show that makes you laugh, cry and love their characters while also solving the most important questions of the universe then “The Good Place” is for you.