Divorce. It’s a concept that we think has become a plague on good Chrisitian marriages in America. But I’m here to offer a different perspective. Divorce should be seen as not only a good thing, but a preferable outcome for children all over the country. Why, you may ask? Because who needs a stable home when you can have two Christmases. Or Hanukkahes. Or Kwanzaaes. We don’t discriminate. The point being that if you celebrate a winter holiday that involves the giving of presents, you better hope that your parents break it off as soon as possible.

Instead of one, wholesome holiday with your parents being happily married and surrounded by supportive family, you can have two, slightly worse holidays instead. Double the presents, double the fun right! It doesn’t matter that your father no longer has a sense of what you’re interested in since he’s too busy sucking down one beer after another because your face reminds him of the life that crumbled before his eyes. Don’t worry about that! At least you’ll still get gift cards to a store that carries something you might like. Even though your mom might seem to be more interested in her new boyfriend than you, that doesn’t matter because he’ll buy you some ‘fun socks’ in a shallow attempt to connect.

Presents aren’t the only thing you’ll be swimming in, because now you’ll get a chance to decorate two tiny one bedroom apartments instead of that boring two-story house one block from your best friend. Who cares that you now only have a single drawer to keep your stuff at your mom’s place because, guess what! She buys you a whole-ass tiny Christmas tree from the front of some random grocery store. Or was it her boyfriend? It doesn’t matter because it’s all for you! To sit on that dresser with your drawer, of course.

Let’s not forget all the holiday parties you get to attend too. You’ll meet so many new people when you get to go to your mom’s boyfriend’s brother’s friend’s party. There’ll be so many people, you won’t know what to do with yourself. And definitely not, because no one expected a kid to be invited but because your mom doesn’t have the money to pay for a sitter tonight so you just sit on the couch alone, with a tiny dog in a holiday sweater, nursing a single can of coke. Besides, at your dad’s parties you’ll be able to see all your family friends, but don’t let their biting comments and whispered sympathies bother you, they’re just jealous that they don’t have two holiday celebrations like you!

So as we head into this holiday season, look around and ask yourself if your holiday could stand to be a bit more interesting. If the answer if yes, start planting the seeds of dissent between your happily married parents now and simply wait for the impending court proceedings,  lawyer meetings and CPS visits to commence. In no time, you’ll be on your way to having the best holiday season of your life! 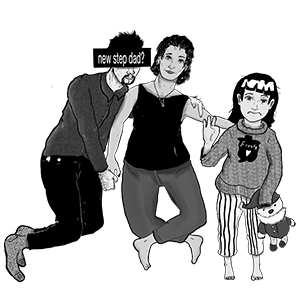