Nathaniel is a bedroom R&B singer-songwriter from West Covina, California. Inspired by his family’s musical background, Nathaniel began creating his own music at a young age and is now focused on developing his craft even further. Nathaniel released his first EP titled “Dreams After Dusk” in 2018 which is available on all streaming platforms.

Q: Were you always a songwriter or was it something that you started doing as your musicianship progressed?

A: I did minisongs when I was in middle school but it wasn’t really serious until I did choir in high school. Sophomore year was when my musicianship really increased and I started making my own lyrics and beats.

Q:  What is one of your musical goals?

A: I want to get to a total of one million streams. I feel like that is a good goal by the end of two years, maybe. I don’t know how slow or how fast it’s going to take, but it’s something I really want to achieve.

Q: What were the easiest and hardest parts of releasing your first EP?

A: The easiest part was probably making the music and the hardest part was figuring out how to get it all out there. I had to inform myself on music distributors and how to get all of my songs on music streaming platforms. This process is what allowed me to see both the creative and business side of the music industry.

Q: How do you combat writer's block?

A: I get writer’s block a lot and whenever it happens I leave it alone for X amount of time and think up different methods of songwriting. For example, I like to think about how my favorite artist would tackle my song in terms of flow and I really try to emulate that. All of my music is heavily inspired by other musicians.

Q: Which musician, dead or alive, would you like to collaborate with?

A: Frank Ocean or Daniel Caesar. I’m really into R&B so working with them would be a dream. I can’t imagine what goes through their head when they are putting their thoughts into fruition. Their songs take me to a whole other world. 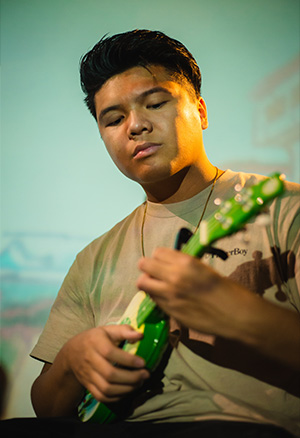 Q: When you are listening to your inspirations, what specifically are you listening for within the track?

A: I am listening to how it is mixed, where they pan specific instruments and how they level their vocals. I know that sound engineering and production is what makes a normal song killer and it can make or break a song. You can have great lyrics and an awesome instrumental but if your mix is trashy then there is no point.

Q: What motivated you to continue growing as a musician?

A: I may go through phases where I want to try something else, but I always come back to my home base. My dream is to make this my career so that is what motivates me.

Q: What inspired you to start songwriting?

A: I always wrote for fun, but my friends are the reason why I started writing and releasing my own music. They convinced me to push it out and see how it goes. My first official EP that I released performed well, I think it has 200,000 streams. Knowing that many people played my songs and were actually willing to listen to it really motivates me to write more.

Q: Is there a common theme within your EP?

Q: What are some musicians you admire that perform a genre different from your own?

A: My music taste is all over the place. I love Nat King Cole, Bob Marley and John Legend. When I was younger that was all I would listen to. Also some EDM.

Q: What is your musical background?

A: When I was six or seven my big sister was taking singing lessons and whenever she was practicing downstairs I would just be listening to her practice. This one time she was rehearsing a song that contained a note that she couldn’t reach, but I was actually able to hit it and it really surprised my mom that I could naturally sing. That’s my earliest memory of me when I started to sing. In elementary it was just something I did for fun; I didn’t really think about it much.

Q: What is one of the messages you hope your listeners take from your music?

A: Have a good time, live life, be real and be the best you that you can be. 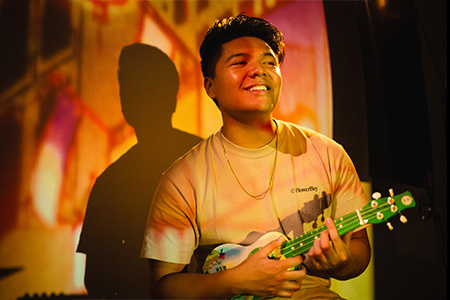