Dr. Wang’s passion for music and music criticism started with hip hop during his sociology undergraduate studies at UC Berkeley in the early to mid-nineties. Wang describes heatrocks the likes of Ice Cube’s “Death Certificate,” De La Soul’s “3 Feet High and Rising” and Public Enemy’s “It Takes a Nation to Hold Us Back” as his awakening to a critical consciousness through the political content of hip hop combined with the content of his sociology and ethnic studies classes.

“I think hip hop really helped to inform a lot of the stuff that I was learning in the classroom and also the other way around as well,” Wang said.

Outside of the lyrical content, Wang sings the praises of sampling in hip hop and how it broadened his musical experience to include soul, R&B, jazz, Latin and African music. This confluence of music and collegiate pursuits led Wang to pursue music criticism and DJing for KALX, UC Berkeley’s college radio station.

“Like I said, hip hop was that gateway for all of my interests as a writer, as a DJ, as a record collector, and as a scholar, and as a podcaster, et cetera,” Wang said. “All of these things really do date back to now we’re talking about 30 plus years ago.”

One PhD in ethnic studies and career as a music critic later, Wang now emphasizes to his students that the experience of music works on two distinct levels: contemplativeness felt when sitting at home with a turntable and headphones, versus the synergistic harmony from hitting up the club, trekking out to a festival or just seeing a friend play a backyard show.

“One of the things about music that’s so powerful is that it is simultaneously a deeply individual and personal thing in terms of the songs, artists or albums that we love feeling extremely intimate and personal to us,” Wang said. “And at the same time, there’s also this very powerful social dynamic to music, in that one of the ways in which we connect to other people is that we might have very different backgrounds, but if you like the same album or you like the same artist, this already creates a basic level of connection between people.”

Relating particularly to the group experience of music, Dr. Wang emphasizes that collective effervescence—a sociological concept of simultaneous oneness coined by Émile Durkheim—occurs not just in the religious or ritual experience but also in boogying down the dance floor. This goes back to the point of ritual, or hitting up the club, being a mass bonding mechanism, a sense that when the beat is just right and all the elements align there’s a higher power connecting those participating in the ritual of music.

“It might seem completely ordinary, millions of people go out dancing every single day. They can dance in their bedroom but they don’t, they’re going out to do it,” Wang said. “They’re doing it with other people because what they’re seeking, whether they know it or not, is that high of collective effervescence you get from participating in this ritual with one another. And music is what makes that possible.”

Outside of his academic work, Wang is also a noted author and podcast host. Wang started his current podcast, Heat Rocks, back in 2016 with Morgan Rhodes. Wang and Rhodes’ partnership goes all the way back to their days co-hosting Tuesday Reviewsday at KPPC.

“And very soon into that partnership, I think Morgan and I realized that yeah, our tastes are very simpatico and that we were constantly turning each other on to new music,” Wang said.

The move from written music criticism to podcasting about music is a significant one for Wang. He notes that though both modes of music criticism involve scripting out and following an idea. Writing is much more contained. The emphasis is on how a turn of phrase or prose will come off of the page, whereas hosting and interviewing becomes a game of coaxing a guest into sharing their insights.

“When I write, I’m the person who’s now tasked with coming up with insights and there’s a lot of pressure that comes with that. And I think at a certain point it can be kind of tiring to try to constantly come up with a lot of insight,” Wang said. “Versus as an interviewer, my job is to get someone else to say something really smart and insightful. And when you do so, there’s a great sense of accomplishment.”

One example Wang gives is when he and Rhodes interviewed recording duo and Prince collaborators Wendy Melvoin and Lisa Coleman about Prince’s “Around the World.”

“There were so many points in that interview where I kept thinking to myself, ‘This is so great, like they’re just dropping these nuggets of anecdotes,’” Wang said. “The accomplishment I feel is simply that having them in studio allows for these things that our listeners get to absorb.” 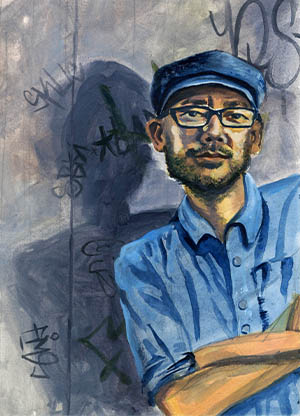 Wang describes his and Morgan’s choice to focus on albums as one that came out of them both growing up as Generation X and the idea of an album as an organizational unit of tracks and how filling the experience of digesting an album is.

“If you're going to have a show in which you're going to talk to someone for, let's say, anywhere between 45 minutes to 90 minutes,” Wang said. “I think an album fills the time differently than if we're just talking about favorite songs.”

But Wang also acknowledges that the appeal of an album may not hold for someone his daughter’s age and that current and future generations are more likely to follow an artist through individual tracks rather than albums. The key distinction between albums now and then that Wang lays out is that you’re stuck with the CD you picked up off a record store shelf in 1990, whereas subscribing to a music service in 2020 puts nearly the whole of the musical cannon at your fingertips.

“The album for a lot of people today is simply a delivery mechanism by which you have access to these different songs and then you can just cherry pick the songs that you like off of there,” Wang said.

The change in distribution method also impacts that coveted aspect of hype. Wang partly attributes this to record labels’ roles as gatekeepers waning. Whoever a recording artist may be, if they have the know how it’s possible to record, produce, and distribute an album all from the comfort of their own bedroom.

“I think we're in an interesting moment where whether the album continues to hold sway I don't think is guaranteed because artists have other options by which they can release music,” Wang said. “And I think partly this is also tied up with the fact that selling music simply isn't as lucrative as it used to be.”

While there’s still a small number of big names that can move record sales, Wang points out that services the likes of Youtube, Spotify or iTunes aren’t shelling out more than fractions of pennies on the dollar for streams. This makes other avenues for income necessary such as touring, merchandise, song placement and crowdfunding.

“I think the album doesn't necessarily have that same force that it did because number one music sales simply account for less of how artists make their money these days as compared to the past because of all the changes wrought by the internet. That said, I don't imagine that the album would ever be abandoned at least no time soon,” Wang said.